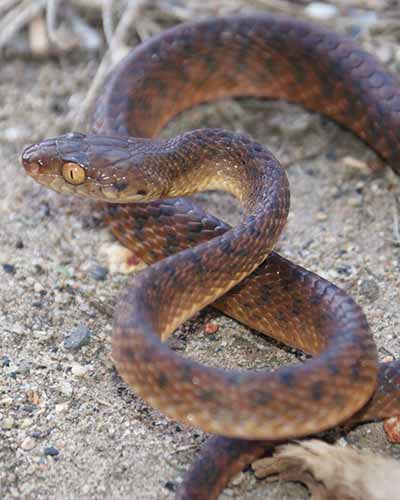 Weakly Venomous
The Brown tree snake is considered weakly Venomous. Conjecture surrounds the toxicity of this species with most authorities regarding it as a minimal risk to all but young children.

Typically the Brown Tree Snake is a slender-bodied snake with a distinctly bulbous head well defined from a narrow neck. Large eyes with vertical pupils. Upper brown to reddish-brown or even dark orange, with irregular, indistinct darker cross-bands. Belly creamy, apricot or orange. Central row of mid-body scales running down the centre of the back larger than surrounding mid body scales. Maintains a strong defensive “S” shaped posture. Midbody scales at 19 -23 rows.

The Brown Tree Snake attains an average length of 1.2 metres with occasional specimens reaching 1.8 metres. Te average size of animals may be influenced by population dynamics and/or sexual dimorphism.

In the Greater Brisbane and Gold Coast areas the Brown Tree Snake occupies a wide range of habitats from rain forest, wet and dry forests, woodland, heathland, melaleuca swamps and rocky outcrops. Within the confines of the suburban landscape this species can be found in backyards and gardens. They regularly inhabit the ceiling voids of homes where they can actively target the introduced Asian House Gecko a a food source.

Primarily a nocturnal species which generally shelters during the day. Observations was made at Pine Mountain where a Brown Tree Snake was actively targeting Fairy Wrens in the middle of the day in a cluster of Lantana.

An agile hunter the Brown Tree Snake targets birds and small mammals. It also will consume frogs and reptiles.

The Brown Tree Snake is a skilled climber and is often found in the heavy foliage of trees and shrubs, in roofs, rafters and other above-ground environs. Unfortunately for bird keepers the Brown Tree Snake is commonly encountered when exploiting caged birds for an easy meal. The relatively slender build of this species, coupled with its climbing capability make it highly efficient at gaining entry to bird aviaries that have not been constructed to exclude even the smallest of snakes.