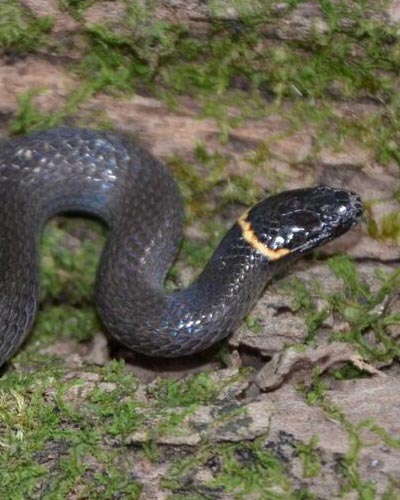 Significance to Humans: Weakly Venomous
Not considered dangerous to humans. All crowned snakes are reluctant biters, relying more on bluff display than bite. They are weakly venomous and have tiny mouths and short fangs. They will generally rear up & ‘mock strike’ with mouth closed, more of a ‘head butt’. If bitten, as with any snake bite, apply correct first aid and seek medical attention.

General description: Very small snake, with small eyes. Body generally dark steely-grey to black above, belly creamy-yellow with thin, dark cross-bands. ‘Crown’ is a narrow (usually only 2 to 3 scale width), cream or white collar on nape of neck which extends forward along sides of head, sometimes to end of snout. Nape band narrower than White Crowned, & area enclosed within crown larger & not such a distinct ‘patch’. Midbody scales at 15 rows.

Average Length: 25cm. Individuals have been measured up to 35cm

Around the home: Under most ground detritus such as compost, logs and stones in well-vegetated gardens.