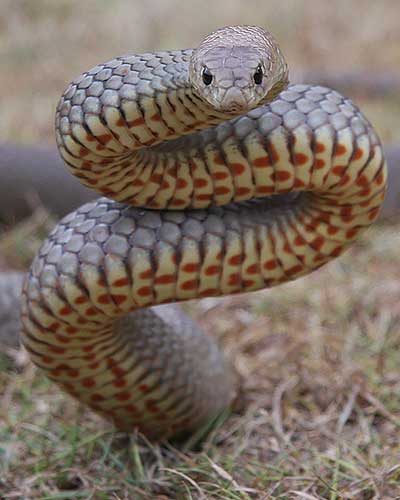 Significance to Humans: Highly Venomous
Bites from the Eastern Brown snake have caused human fatalities. In fact the Eastern Brown Snake accounts for more fatalities than any other Australian Snake. A nervous, ready biter it will defend itself if threatened. Maintains a strong defensive “S” shaped posture. The Eastern Brown Snake is the second most toxic land snake in the world and the most venomous in South East Queensland. Bites from this species should be treated immediately and attended to with correct first aid.

1.4 metres but a specimen of 2.3 metres was recorded from Karalee in South east Queensland by a brisbane snake catcher. Snakes in excess of 1.8 metres are very uncommon.

Diurnal, active hunter but has been seen active on hot nights. Not regarded as a climbing species but may occasionally climb in search of potential prey. Quick to retreat most specimens are usually seen disappearing into available cover.

Local distribution: Most common large venomous snake. Readily occurs in all but the inner suburbs of Greater Brisbane but especially to the west throughout Ipswich and the Lockyer and Brisbane Valleys. However recent captures by snake catchers have recovered specimens as close to Brisbane CBD as Indooroopilly and Taringa. Common along bayside suburbs to the north and south including the Gold Coast and Sunshine Coast.

Often encountered in and around localities with a strong rodent presence such as bird aviaries and stock feed sheds. Due to its active foraging nature it often enters homes through gaps afforded to it by open or gaps under doors. Any ground refugia may be utilised such as timber piles, sheet iron, rock walls and heavy vegetation. The maintenance of yards and the control of spilt seed and other food associated with pets may assist in the control of rodents which this species exploits so well.

Could be typically associated with ground refugia such as timber piles, sheet iron, rock walls and heavy vegetation. Has been recorded climbing to take frogs from eves of homes but this is rarely encountered. A large freshly sloughed Black snake is truly a beautiful snake often even appreciated by self confessed snake despisers.