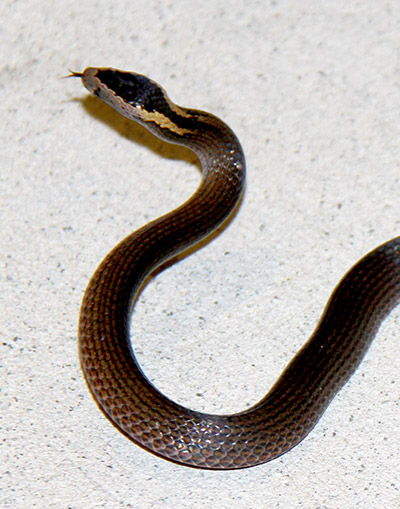 Weakly venomous
The Golden-crowned Snake is considered to be weakly venomous. However known bites have in some cases caused significant localised symptoms that required medical oversight.Bites should therefore be treated with caution. All crowned snakes are reluctant biters. They will rear up in a bluff display & may ‘mock strike’ with mouth closed. The Golden-crowned Snake is the largest species of all the Crowned snakes & will bite if highly provoked or antagonised. As with any snake bite apply correct first aid and seek medical attention.

The Golden-crowned Snake is most typically greyish-brown to dark brown with salmon to orange belly with mid line of black spots. ‘Crown’ of parallel creamy-yellow or paler yellow-brown single stripe starting at snout & sweeping back either side of face and along neck, generally across eyes. The Crown does not form band across nape of neck. May be incorrectly identified as a small Red Bellied Black Snake. Midbody scales at 15 rows.

Females reach a greater overall body size and measurement than male snakes. Males reach about 50cm but female specimens have been noted to reach 90cm.

It is an active forager searching for lizards such as skinks and their eggs. Has been known to occasionally take small frogs.

Found across moister suburbs of the Greater Brisbane bioregion including Brisbane, Gold Coast, Ipswich, The Redlands and Logan. Generally restricted to moister suburbs or homes near well vegetated riparian margins.

The Golden-crowned Snake can be found under compost, logs and stones in well-vegetated gardens. It is synonymous with moist garden areas with abundant leaf-litter, and around rockeries that provide ideal habitat.