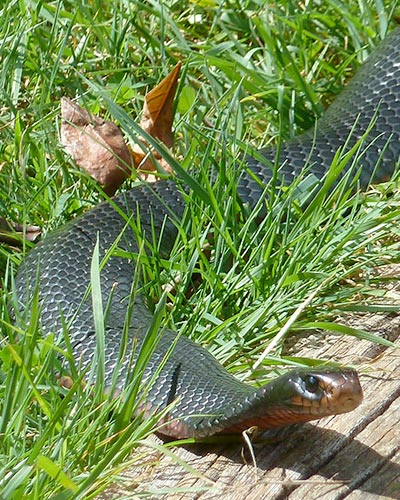 Uniform glossy black above along whole body except tip of snout which is paler brown. Belly has red or pink flush, brighter on the sides & paler in the middle. Hind edge of belly-scales is black, creating an even red & black striped appearance. Belly colour is visible along flanks and sides distinguishing it from the Eastern Small-eyed Snake. Midbody scales at 17 rows.

1.5 metres but larger specimens have been recorded in the Greater Brisbane, Ipswich and Gold Coast areas. the largest recorded specimen captured by a member of our team measured 2.04 metres in length.

This species feeds primarily on frogs, but also other reptiles (including other snakes) and small mammals are taken regularly. This species was initially a large casualty of the introduced Cane Toad. However it appears to have excluded these from its diet in response to the toxins present in the toads.

Reported to have suffered declines in numbers in some areas subjected to significant favored habitat destruction. Readily turned up in inner suburbs with recent records by snake handlers from Milton, St Lucia and Moorooka but generally associated with suburbs supporting riparian habitats. One specimen captured inside the Brisbane Convention Centre and another in Charlotte street recently.

Could be typically associated with ground refugia such as timber piles, sheet iron, rock walls and heavy vegetation. Has been recorded climbing to take frogs from eves of homes but this is rarely encountered. A large freshly sloughed Red-bellied Black Snake is truly a beautiful snake often even appreciated by self confessed snake despisers.