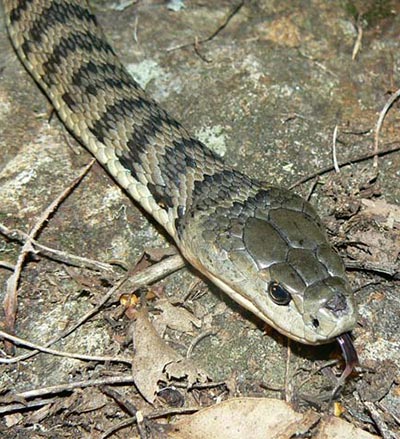 Brown to olive with narrow, irregular cross-bands or blotches of darker brown. Belly surfaces greenish-grey or olive-cream often with darker blotches. Midbody scales have a raised keel or carinated appearance. Coloration and scale structure has led to some confusion with the non venomous Keelback Snake (Tropidonophis mairii) which differs in having a loreal scale present and usually more defined keels on each scale. Midbody scales at 23 rows.

Predominately moist areas within forest at altitude although small populations may persist in some moist lowland localities.

Commonly encountered at Mt Nebo, Mt Glorious and the western facing slopes of the D’Aguilar range. In 1999 a specimen from Rochedale was presented by a snake relocator where historical records are known. Periphery suburbs such as Upper Brookfield have also seen recent records.

Encounters with a Rough-scaled Snake around the home have been recorded by a local snake handler servicing the Mt Glorious and Mt Nebo area. Snakes were encountered on a front verandah and on a shelf in a kitchen. Could be typically associated with ground refugia such as timber piles, sheet iron, rock walls and heavy vegetation. The climbing ability of the species may see it utilise roof cavities in search of geckoes and frogs.