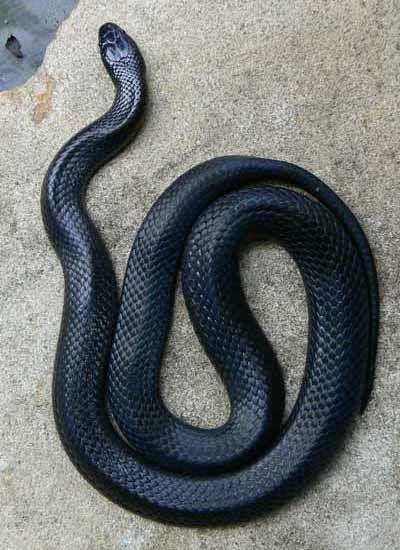 Small black eyes barely discernible from surrounding dark scales. Colour generally glossy dark grey to black with cream or pink belly, sometimes with dark spots. Belly colour does not extend up onto sides, and is not visible as it is on the Red-bellied Black Snake. Midbody scales at 15 rows.

The average size for this species tends to vary with populations to the south of their distribution supporting animals attaining larger maximal size. Here in South East Queensland the average size is considered to be approximately 50cm but specimens to 90cm are known.

Range of habitats but generally requires presence of leaf and ground litter such as fallen branches and logs. Shelters under rocks, logs, sheets of bark etc during day.

Primarily a nocturnal species that can be quite active even at relatively cooler temperatures. It is often the most common snake species seen on roads through favorable habitat. The species has claimed one fatality with a bite to an individual in Cairns in 1969.

Feeds on small skinks and other small reptiles, their eggs, and occasionally frogs. One discovered eating a road kill marsh snake on the side of the road near Fernvale.

A common species it is found throughout most periphery suburbs with relatively intact vegetative structure. An aggregation of nine individuals was observed under a sheet of bark at the Purga Nature Reserve, west of Ipswich. Further aggregations have been noted by numerous herpetologists suggesting the species regularly aggregates in favorable locations.

Despite its common occurrence in many suburbs, the Small-eyed Snake is infrequently encountered with snake relocators turning up only a small number every year. The main circumstance when they are discovered by home owners is when a roving cat brings one inside. Obviously this is disconcerting the the home owner and a snake catcher should be called due to the venomous nature of this species. Could be typically associated with ground refugia such as timber piles, sheet iron, rock walls and heavy vegetation.