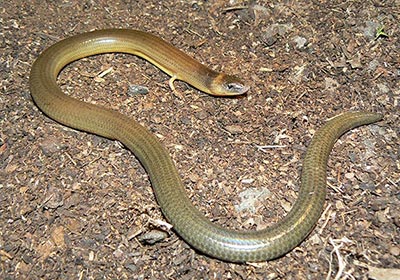 Verreaux’s Skink is worm or snake-like in appearance with a long body and short weak limbs, each of which have 3 digits and reduced to clawed stumps in the hindquarters. Brown to grey on the top with a creamy-yellow band across the base of the head. This band is more prominent in juveniles and tends to fade with age.

300mm with records of individuals in excess of 350mm.

Prefers more humid habitats such as wet sclerophyll forests, rainforest margins, vine thickets and coastal scrubs. Tolerant of habitat disturbance, it thrives in compost heaps and gardens in suburbia, and beneath logs in open paddocks.

Successful in all Brisbane suburbs.

Most specimens are found after turning loose soil or grass clippings, discovered by a roaming cat or scurrying from the lawn mower from within long grass. Often found in numbers within prime locations such as compost heaps. They are inoffensive and should simply be released within the confines of your yard in heavy cover such as mulch or under a dense shrub preferably at night.

Please be patient while our image gallery loads. If viewing images in the lightbox viewer by clicking on an image, please allow a few second between each image as some images are large to retain their quality and size. Images are loaded straight from Dropbox, if blank spaces appear in gallery please click on the refresh icon top left of gallery. All image are the property of the website or respected owner and can not be re-used without permisson. Copyright applies