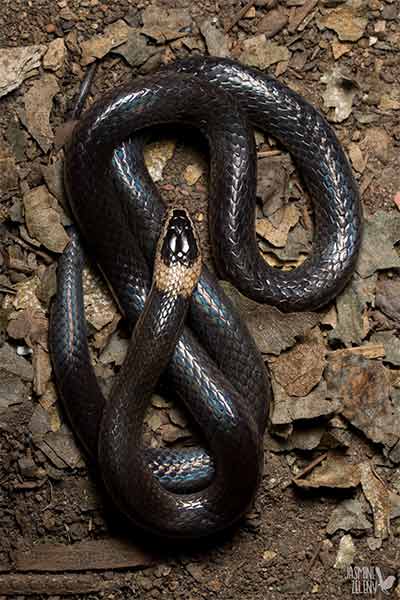 weakly venomous
The White-crowned Snake is a weakly venomous species that is not considered dangerous to humans. All the crowned snake species are reluctant biters, relying more on bluff display than bite. They have tiny mouths and short fangs. They will generally rear up & ‘mock strike’ with mouth closed, more of a ‘head butt’. If bitten, as with any snake bite, apply correct first aid and seek medical attention.

Smallish snake, with small eyes. Body generally dark steely-grey both upper & belly. Distinctive ‘crown’; broad (at least 4 scales width) white or pale yellowish band on nape of the neck extends forward around sides of head to meet at snout, enclosing an oval- or diamond-shaped black patch on the top of head. Midbody scales at 15 rows.

As with all the crowned snake species, the White-crowned Snake is sexually dimorphic with females attaining greater body size than males. Average length is around 35-45 cm for females and around 30-35 cm for male snakes.

A regular inhabitant of virtually all suburbs of the greater Brisbane and Gold Coast regions, it occupies the leaf litter and moister locations within the confines of suburban backyards. Within more natural areas it occupies moist sheltered areas within forests, woodlands and heathland.

The White-crowned Snake is a highly secretive, nocturnal snake. It will hunts day-active skinks in leaf-litter at night while they are sleeping. Primarily terrestrial. Shelters by day in moist litter, under rocks, and logs.

The White-crowned Snake is considered a lizard specialist. It is also recognized as feeding on skink eggs.

Possibly the most abundant of Brisbane’s smaller snake species, although it is still considered to be highly cryptic. The most commonly encountered of the crowned snakes. Found in all suburbs including the inner city.

Due to its relatively small size the White crowned Snake can be found in a number of micro habitats around the home. Favored locations may include compost heaps, moist garden areas with abundant leaf-litter, and around rockeries provide ideal habitat. As iot is primarily a nocturnal species it is often discovered by roaming cats at night. We receive calls regularly for White-crowned Snakes that have been brought inside after being delivered to the homeowner by a free roaming cat.