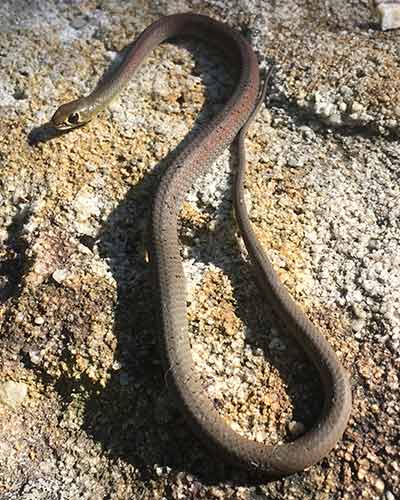 Potentially Dangerous
Although often regarded as a mildly venomous species, the Yellow-faced Whip Snake should be considered Potentially Dangerous especially if children or the elderley are involved in a a bite. Venom activity in this species may cause localised pain & severe symptoms. Apply correct first aid and seek medical attention.

Not regarded as a large species the Yellow-faced Whip Snake reaches average length of around 65-70cm, but specimens up to 80cm have been recorded locally.

Dry open areas including open forests, woodlands and grasslands. A frequent species around homes it takes advantage of the high skink numbers associated with urban gardens and dwellings.

Primarily a diurnal, active hunter the Yellow-faced Whip Snake has been seen active on hot nights. Not regarded as a climbing species but may occasionally may climb in search or pursuit of potential prey. Quick to retreat most specimens are usually seen disappearing into available cover. When handled they will often flick around quite vigorously. Not generally regarded as a ready biter.

The Yellow-faced Whip Snake is a Swift, fast-moving predator of lizards such as skinks. They occasionally take frogs with one record of a juvenile white crowned snake being consumed

Found throughout most suburbs with the exception of the inner city. To the west recorded as close to the city as Toowong and St Lucia. Likely to occur in closer proximity to the Brisbane city area.

Swift-moving, alert, diurnal snake. Good vision, active hunter. Frequently seen and commonly enters homes during active foraging efforts. Apparently common due to the high densities of favored skink prey. Will utilise a range of ground localities for refugia including constructed rock and sleeper retaining walls, under rocks, sheets of iron, timber piles and other discarded human litter. Nine individuals were captured under one piece of plastic in a Goodna backyard along side an Eastern Brown Snake. Frequent victim of roaming suburban cats.